The students of TOBB ETÜ, Faculty of Engineering, Department of Industrial Engineering, won the project competition in the “37th National Convention on Operational Research and Industrial Engineering (YA/EM)” organized since 1975. Working with Assist. Prof. Kürşad Derinkuyu as the advising faculty member, our students won the competition with their project titled “Management of Biomass Logistics for Biogas Energy Generation Plant” developed for Bendis Holding A.Ş. 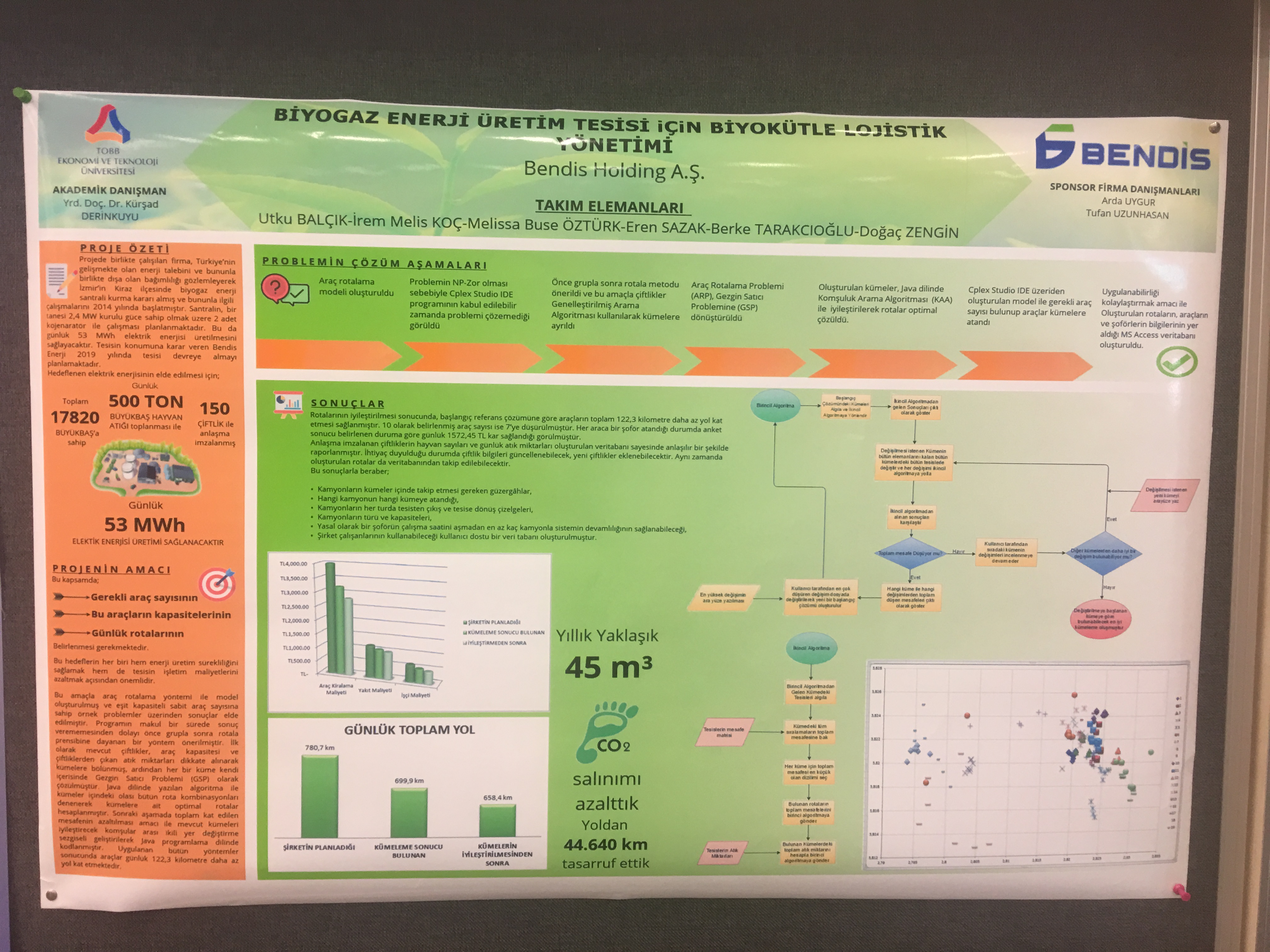 The 37th National Convention on Operational Research and Industrial Engineering was held on 5-7 July, at Yıldız Technical University in Istanbul. A total of 69 projects from all over Turkey took part in the traditional national students competition held within the framework of the convention. The two qualifying rounds culminated in a set of 8 finalists. Our department managed yet another repeat performance of its success in previous years, and had three teams among the 8 finalists. The final presentations made before the academic jury and the audience helped determine the winners. This year saw a total of 3 teams, including ours, win the top prize.

What does the project bring?

The biogas plant to be set up in İzmir’s Kiraz district will see its need for approximately 500 tons of waste per day, covered by agreements with various farms. Even though the agreements are already in place, the number of vehicles, their capacity levels, and the daily routes of these vehicles have to be determined. For this purpose, a model was developed on the basis of the vehicle route preparation method, and the results were obtained with reference to other cases where vehicles involved had a comparable capacity level. The solution entailed two stages. First of all, taking the vehicle capacity and the waste generated by individual farms into account, the farms were grouped, followed by the development of the solution on the basis of the Traveling Salesman Problem, for each such group. The methods applied were coded in Java. The project enabled the collection of waste by driving 122.4 kilometers less per day.

Other projects from our University, which ranked among top 8 finalists

A total of 8 teams took part in the final presentations made on the 6th of July. Among these, 3 were formed by the students of TOBB ETÜ. In addition to the winning team, two further teams advised by Assist. Prof. Eda Yücal also ranked among the finalists, marking a substantial achievement. 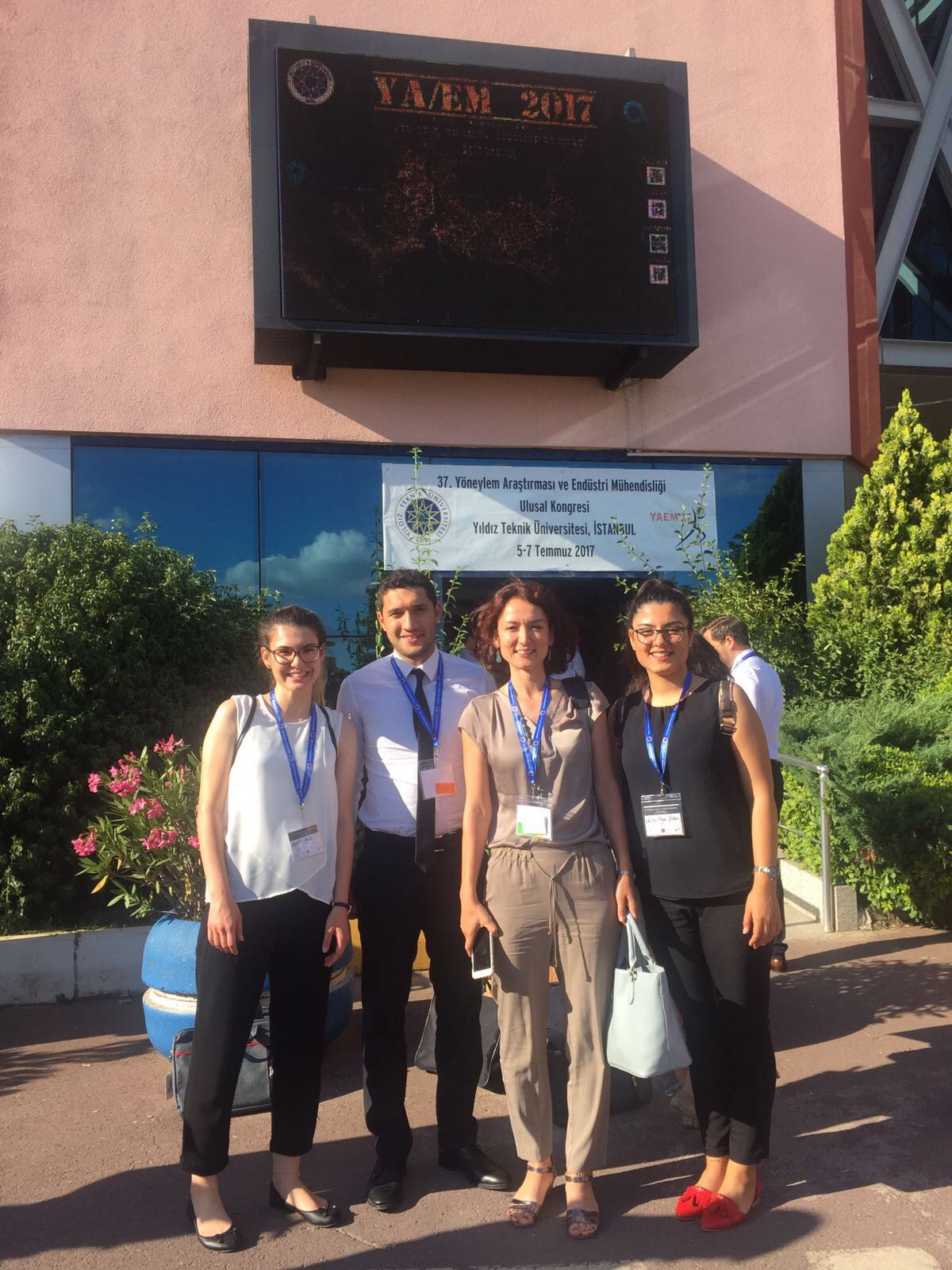 The competition is organized by the Operational Research Association (YAD)

Operational research refers to the application of scientific methods in general, and mathematical methods in particular, for the review and solution of complicated problems, and the means to apply and the direction to take with respect to a specific piece of work. The Operational Research Association (YAD), in turn, was established in 1975, in order to contribute to the promotion, expansion, and implementation of operational research in Turkey. YA/EM Conventions are among the most established professional and scientific organizations held in Turkey on an annual basis. Each year, the Convention is held under the sponsorship of another Department of Industrial Engineering.

As a tradition of the Convention, YA/EM student project competition covers project work undergraduate students engage in in the fields of industrial engineering - operational research. Leading universities of Turkey submit numerous projects to compete in the event. The projects are then evaluated with reference to a number of criteria including the definition and importance of the problem involved, correct and appropriate use of YA/EM perspectives, authentic value of the project, its independence from existing projects, potential and wide-spread effects and applicability, the success of the results achieved, and the authoring of the report.