Gazete ETÜ Had an Interview With Begüm Ataker, Who Won The 1st Place In Women’s EPE Category at The National Inter-University Championship, On Fencing 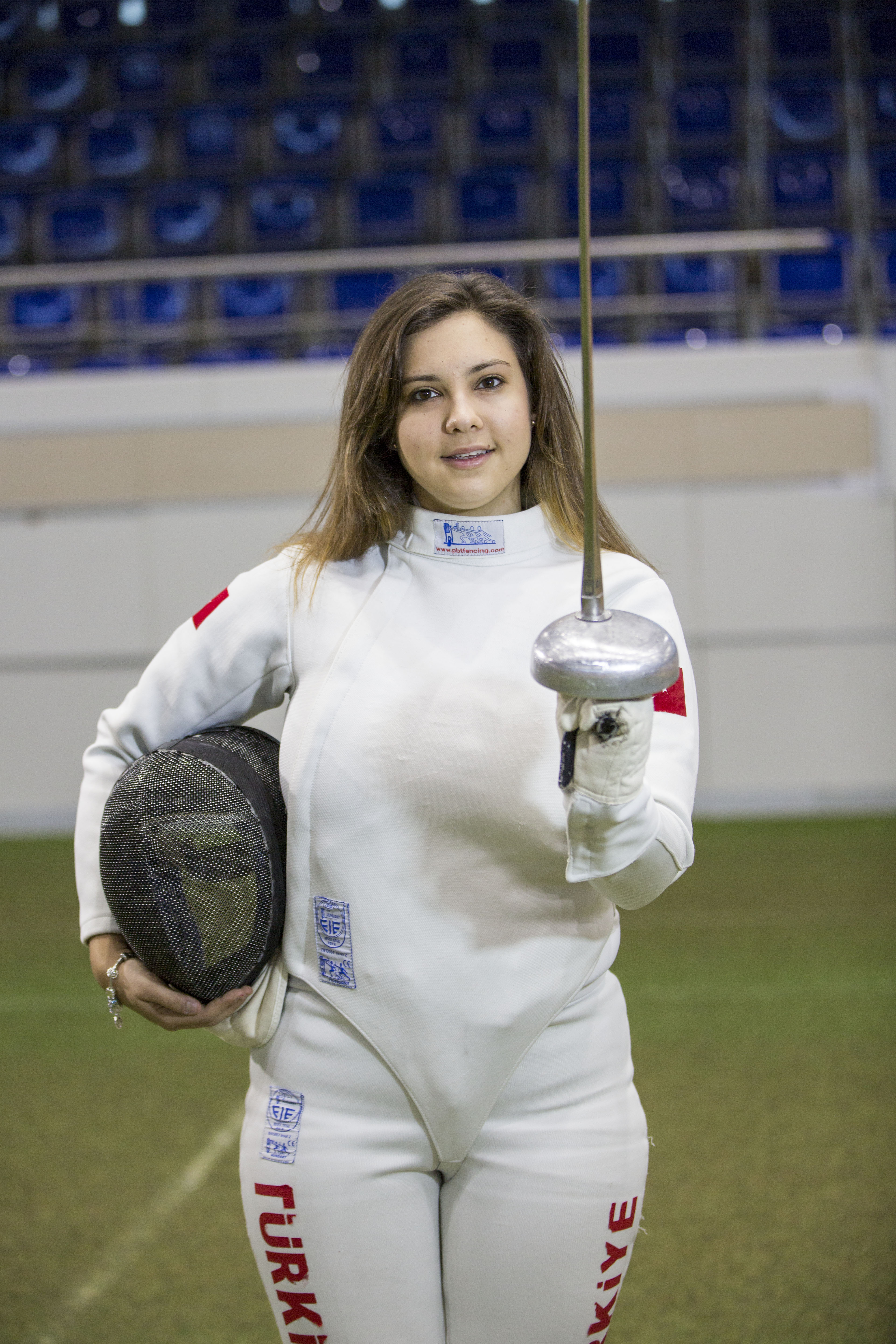 Begüm Ataker from TOBB ETÜ Fencing Society won the golden medal in Women’s Epe Category at the National Inter-University Fencing Championship held in Afyonkarahisar on 5-7 May, 2016.

Having been engaged in fencing for 11 years, and a member of the National Fencing Squad for 6, Begüm Ataker, a student of the Department of Business Administration said she would prepare for the tournaments through extensive trainings on 4 days a week. Furthermore, she mentioned many successes she achieved in various events held in Turkey, and noted her intention to represent Turkey in global competitions.

Begüm said she always found ways to spare some time for the sport despite the busy schedule at the school, and referred to the substantial support TOBB ETÜ gave her to further her success in the tournaments. The Gazette ETÜ had an enjoyable interview with our friend, Begüm Ataker.

How old were you when you started fencing? Was it your own decision, or did your family encourage you?

I began with this sport when I was 9 years old. My family encouraged me as the son of a family friend was also engaged in it. Since day one I wanted to continue fencing, for being with children who are of the same age with me was very nice. I loved being there. Also we got along very well with my coach. That is how I decided to proceed.

Do you remember any moments where fencing was a bit more trying than you imagined? Did you ever contemplate quitting?

Yes. For the last two years the combination of the school and the school was a bit difficult. In the beginning I wanted to give up, because it was really trying for me. But now I want to continue. For, because of fencing I learned to make planned use of my time. I had some initial difficulty in getting used to the busy schedules at the school, but it is rather easier now that I am planning my days in advance.

Which tournament was the most unforgettable one?

The match which took me to the national squad was very special for me. I was actually too young for the national team. You need to be 15 years old at least normally. But I was 13 back then. I was playing in a match for a medal in a category where other contestants were older than me. I didn’t really know I would be selected for the national squad if I won that match. My coach didn’t mention it, to prevent me from getting over-excited. The matches are decided when one reaches a score of 15. When I was behind by 13 to 7, I took a break and consulted with my coach. His advice brought the game to 13-13. Then we took another break. After that I took the lead by 14-13. Then it was 14-14. I don’t remember the rest clearly. The lights were blazing. When I was enjoying the feeling of a match won, I heard my coach say “it is too early for the national squad.” It was then I realized I was selected for the national team. It was a very special moment. At that moment, I didn’t really realize the significance of that event, given my young age. Later on, representing my country in tournaments abroad really motivated me. And I began to work harder to represent my country better. That is how I got really involved in fencing.

What brought you the success? Do you stand out because of your love for fencing, or is working hard the only secret to success?

The success in fencing is achieved by working hard. If you want to be successful, you would need to work hard. But of course your achievement levels vary from one day to another. You might have worked very hard, but if your morale is low, and if you are anxious about something, it would be a problem. 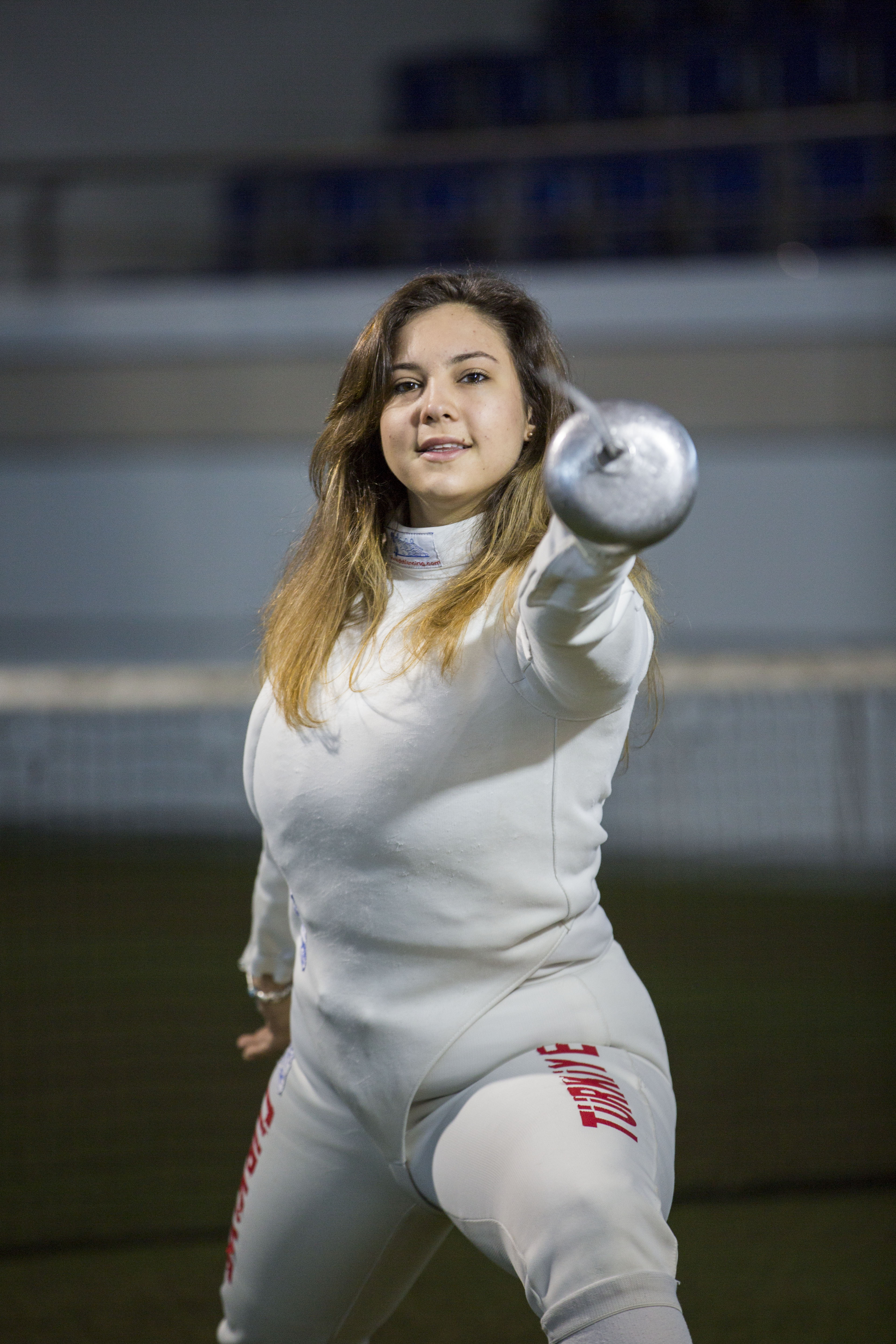 Do you have any fencer you consider as a role model?

There is this Romanian lady: Ana Maria Popescu. I even met her once. She won the world championship in my branch. She achieved success at the Olympics as well. She is able to understand the flow of the game, and make her plans accordingly. She is also left-handed just like me. Being left-handed is a great advantage in fencing. I really wanted to meet her, and I got the opportunity during the world championship in 2014. That was a moment which made me extremely happy.

How do you prepare for the tournaments?

How do you get prepared mentally before major tournaments? Do you have any lucky charms?

Of course I do. I try to listen to some moving music with a high tempo, to increase my energy levels. I particularly like listening High School Musical’s song Bet On Me. I even dance a bit to it. I also try not to talk to anyone before the match, so as not to lose my concentration.

Who supported you most for your career?

My family. Particularly my father. He takes me to training after his work, without hesitating at all. He also accompanies me at all tournaments. And early on my first coach was like a godfather to me. He supported me immensely. But right now he is in Austria.

What kind of support did the school provide you in this process?

When I was enrolled at TOBB ETÜ in 2014, I was granted a national athlete scholarship. Thanks to that scholarship, I am exempted from tuition payments. And also the school allows me to take part in inter-university tournaments. In those tournaments I won the second place in 2015, and won the championship for Turkey in 2016. I also train with the fencing society at the school. But there, I usually try to help newcomers rather than focusing on my own training. At the society, we are like a family. We embrace anyone interested. Early on everyone doubts her skills. Sure, skills are important, but you achieve success if you apply technique correctly nonetheless. At the society, we try to make that point. We have trainings and try to work with everyone personally.

How did fencing contribute to who you are right now? What would your life look like without fencing?

I made many friends thanks to fencing. Before starting with fencing, I was a really shy kid. That is one of the reasons why my family wanted me to start it. Thanks to fencing, I saw my self-confidence and my social skills improve. I started to stand on my own feet. I started feeling like a more independent and a more liberated individual. It also contributed to me from a cultural perspective. I saw many countries thanks to the tournaments. I disagree with the concern that the sports would hinder my studies. It really contributed to my level of academic success. I learned how to concentrate, and how to focus on something for extended time frames. I am now able to focus better on my classes. As I said earlier, I also learned how to plan my time.

Nope. When I engage in any other sports, muscles I wouldn’t want to starts exercising, and I face the risk to suffer injuries. That is why I do not engage in other sports. But I learn how to dance at the dance classes offered at the school. Thanks to dancing, I saw my flexibility levels increase. That is a major advantage in fencing.

Do you have any targets set for yourself? A tournament you want to take part, or an award you want to get?

I really want to take part in 2020 Olympics, but I have to work really hard through an extended process in the coming years. I tried my chance in the selections for Olympics in 2015, but I had no luck back then. I want to achieve that success in 2020.

Gazette ETÜ wishes you all the best in your future career. We would really like to see you with an olympics medal.